There where the mighty mountains bare their fangs unto the moon;
There where the sullen sun-dogs glare in the snow-bright, bitter noon,
And the glacier-gutted streams sweep down at the clarion call of June:

There where the livid tundras keep their tryst with the tranquil snows;
There where the Silences are spawned, and the light of hell-fire flows
Into the bowl of the midnight sky, violet, amber, and rose:

There where the rapids churn and roar, and the ice-floes bellowing run;
Where the tortured, twisted rivers of blood rush to the setting sun –
I’ve packed my kit and I’m going, boys, ere another day is done.

I’m sick to death of your well-groomed gods, your make-believe and your show;
I long for a whiff of bacon and beans, a snug shake-down in the snow,
A trail to break, and a life at stake, and another bout with the foe;

Well, I don’t have craving for whiff of bacon and beans like Service in wilderness, but my cravings for mountain air filled with fragrance of sage and pines lures me to wilderness. Last weekend, I backpacked into Hoover wilderness along with Rama Krishana,  Mallik Vantedu, Sai Padimiti and Satya Boora for two days.

We started on Friday night from San Ramon and reached June lake around 2AM. Our plan was to hike into 20 Lakes Basin from Saddlebag Lake. Saddlebag trail also needs wilderness permit for backpacking, however there are no permit quotas. There are very few trails in Inyo National  forest that does not limit number of permits per day. we picked up our permits from Mono Basin Scenic Area Visitor Center in Lee Vining and set out to the trail head. Saddlebag Lake is just few miles away from Yosemite National Park east entrance. Road to Saddlebag lake turns left after about 2.2 miles from east entrance of the park towards Lee vining. Another 2.5 miles on semi-dirt road takes you to Saddlebag lake. Saddlebag lake is the highest elevation lake (at 10,090 ft.) in California that one can driver to.

Our plan was to go around the Saddlebag lake and enter 20 Lake Basin and camp out far end of the basin. The Basin is  surrounded by beautiful peaks including Tioga Crest(Elevation:11911 ft.), Excelsior Mountain (Elevation:12,446 ft.), Shepherd crest(Elevation:12,040 ft.), North peak (Elevation:12,247 ft.) and Mt. Conness (Elevation:12589 ft.). Trail itself is a very easy 9 miles round trip with about 500 ft. elevation gain.

We started our hike at 12:30PM from east side of the lake. We supposed to take Lundy Pass towards Helen Lake, instead we took trail that leads to Stealhead lake. Weather was excellent. Afternoon rain in forecast, we had nice cloud cover through out the afternoon. Breeze was intoxicatingly fragrant, perhaps from some kind of sage brush. Most probably, Mountain sliver sage. I can recognize California sagebrush (Artemisia California), which is very distinct from other sage varieties, but it’s impossible for me to differentiate one sage subspecies to others. Typical Sierra rain comes and goes pretty quickly. We had few showers as we approached Greenstone lake.

Mallik praying for world peace ( 🙂 ) at Greenstone Lake …Storm brewing over North peak and Mt. Conness in back drop.

After Greenstone lake, trail is bare with almost no tree cover, but offers exceptional views to Shepherd crest, Excelsior Mountain and North Peak as we cross Wasco lake. Trail ascends as it contour around north end of Steal head lake and enters rocky basin between Cascade lakes and Stealhead Lake. We found a small meadow near small lake at foothills of North peak and camped for the night. 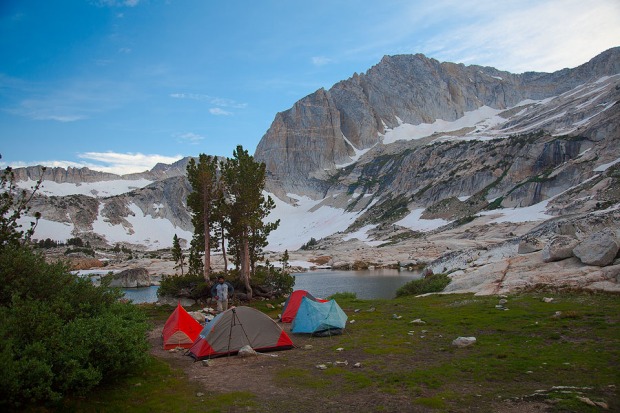 Sunset was good; there were clouds and color, but not where we would like them to be. So did not bother photographing sunset. South skies were clear, so hoping for good view of milky way in the night. But as we geared up for night photography, a huge cloud came and covered south skies.

Night was peaceful, QUIET and cold.

We woke up early for sunrise. There is some mystic nature in alpine glow on mountains during sunrise. I’m neither a mystic nor science can not explain the phenomena, but that moment has magical impression on observers. Never fails to bring gaiety in the nature’s admirers.

Some of the images from that same location. 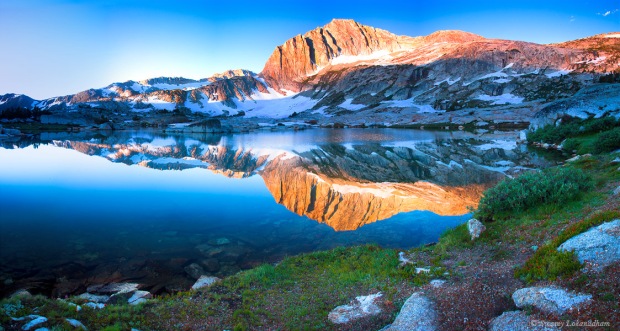 After regular morning chores, we packed up and started our hike back. From Greenstone lake, we took trail that goes from west shore of Saddlebag lake. We traversed couple of snow patches on that trail.

Yes, there is still lot of snow at elevation starting from 10,500ft to 11,000 ft. as late as end of August.  It’s not typical, but we had above normal snow accumulation this winter. As we cross reservoir, saw that Saddlebag is spilling over the spillway into Lee Vining creek, first time for about 34 years (1983), which underlines the good snow year.

We reached trailhead around 12:30PM. 20 Lake Basin is great place for first time backpackers… easy trail and great views…easy to get permits !